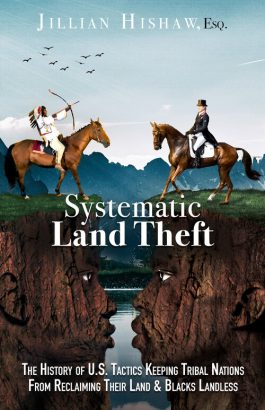 “Stolen Lands” explains what happened to the land?

Stolen Lands by Jillian Hishaw points to facts like. Of the 2.3 billion acres that make up the United States, twenty-nine percent is federally owned, two percent is held as Indian reservations, nine percent is owned by state and local government, and the remaining sixty percent is held privately. For over 10,000 years tribal nations inhabited the lands of North America it wasn’t until Europeans began to migrate to the U.S. in the late 1400’s did the country consists of borderlines creating states and ownership of private property. African and indigenous tribes believed in communal living and conservation of resources.

As the population of Europeans increased, the number of large animals like the American buffalo decreased. By 1889 the number of buffalo decreased from 60 million to 541 over the span of a decade. Millions of indigenous people were killed by Europeans for their land. The remaining survivors were forced to live on reservations which today consist of 2 % of U.S. land. From 1887 to 1934, 90 million acres of tribal land once reserved for tribes was “purchased” by the federal government.

To cultivate the land, 600,000 slaves were transported from Africa, remained in bondage til 1863. Europeans became the majority race and leveraged stolen land as collateral to secure wealth. Legal and policy systems were set in place to ensure their future hierarchal wealth status.