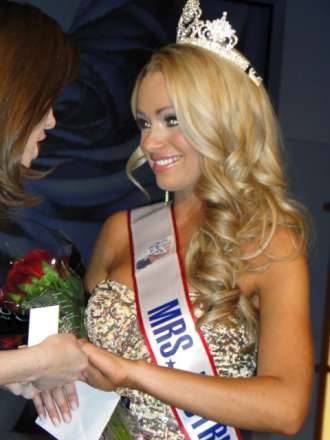 Washington, DC’s Arika Burton is the new Mrs. DC America 2012 winner. She was crowned on Saturday night, March 10, 2012 in front of a crowd of over 250 attendees at the Jack Morton Theatre in Washington, DC. Mrs. Burton will move on to represent DC at the Mrs. America pageant later this year. Arika is married to Bradley Burton and they have been married for one and a half years. Arika has a Bachelor’s Degree from the University of Maryland in both Finance and international Business. She has also completed the International Finance and European Union Study program in London, England.

Arika’s community platform is Financial Literacy. She is actively involved in the National Financial Educators Council to raise awareness and improve financial capabilities. The Mrs. DC America Pageant publicly recognizes beautiful married women, living and/or working within a 25-mile radius of Washington, DC, who have obtained personal, professional and community achievements. An official preliminary pageant to Mrs. America and Mrs. World, the Mrs. DC America Pageant welcomes women from all ethnic backgrounds to compete in a yearly pageant for the title of Mrs. DC America.

The Winners of the Mrs. DC America 2012 contest are: