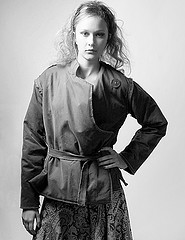 gentleman officers had opportunities to make notes of foreign styles: an example is the “Steinkirk” cravat or necktie.

The pace of change picked up in the 1780s with the increased publication of French engravings that showed the latest Paris styles; though there had been distribution of dressed dolls from France as patterns since the 16th century, and Abraham Bosse had produced engravings of fashion from the 1620s. By 1800, all Western Europeans were dressing alike (or thought they were): local variation became first a sign of provincial culture, and then a badge of the conservative peasant.

Although tailors and dressmakers were no doubt responsible for many innovations before, and the textile industry certainly led many trends, the history of fashion design is normally taken to date from 1858, when the English-born Charles Frederick Worth opened the first true haute couture house in Paris. Since then the professional designer has become a progressively more dominant figure, despite the origins of many fashions in street fashion.

Modern Westerners have a wide choice available in the selection of their clothes. What a person chooses to wear can reflect that person’s personality or likes. When people who have cultural status start to wear new or different clothes a fashion trend may start. People who like or respect them may start to wear clothes of a similar style.

Fashions may vary considerably within a society according to age, social class, generation, occupation, and geography as well as over time. If, for example, an older